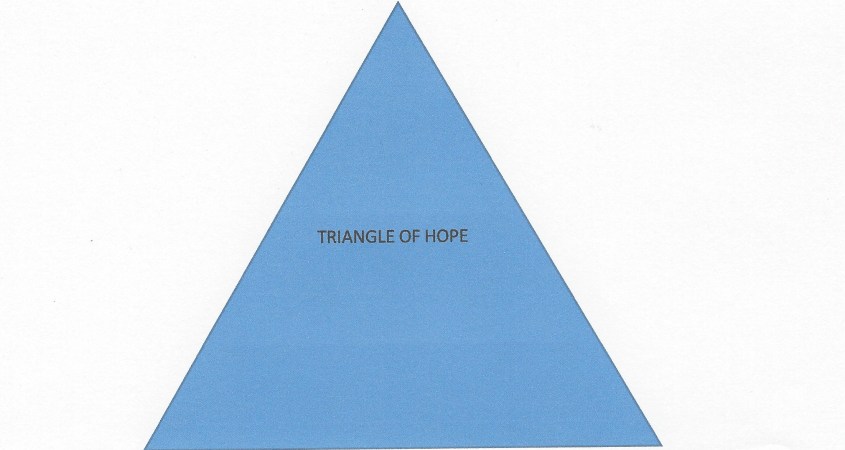 2017 will see the demise the of Liberal Party as we knew it. No longer will it be a centre-right party espousing a broad-church base, instead it will be an extreme centre or mild centre left party with a base that is made up of progressive moderates. Many conservative members of the Liberal Party have resigned. Some have decided to go with another political party and others are waiting to see what progresses so that they can find their new home. As far as I can see, there are three alternatives in our political landscape which could house ex liberal members. Lets call them the three disciples. Together they are The Triangle of Hope.

On the bottom far right side of the Triangle of Hope we see Pauline Hanson’s One Nation. One Nation has proven to be an effective player on the electoral scene. Social policies such as climate change, tough immigration, tough on crime, and tough on welfare attracts conservatives however their economic viewpoints – which historically united the liberals – veers to the left of politics. They do believe in protectionism on industry and they aren’t fond of free trade. This could be a major turn off for conservatives. Many conservatives believe in economic freedom therefore no regulations should interfere with economic progress. On the other hand to give credit where it is due, Pauline Hanson and One Nation have treated many economic issues on merit rather than having a blanket rule approach. For example One Nation does not believe in foreign ownership, however they do support the Adani Coal Mine in Townsville. This shows that One Nation is willing to negotiate for the good of the nation in particularly when it comes to jobs. Organisationally however Pauline Hanson’s One Nation belongs to Pauline Hanson. It is her Party. This will not gel with conservatives. One of the main reasons why many conservatives within the Liberal Party are leaving is because the membership is not allowed a voice. If One Nation wants to pick up these conservative votes then they need to change their organisational structure. Otherwise conservatives will look to others within the Triangle of Hope.

On the bottom far left side of the Triangle of Hope we see the Liberal Democratic Party. The LDP have a libertarian slant to their policies. They stand for low taxes, small government and individual responsibility. This sounds more like a conservative party however whilst they may feel at home with their economic viewpoints they may struggle to comprehend their social policies. The LDP do believe in legalising same sex marriage (but protecting religions from being sued if they refuse to marry same sex couples), legalisation of drugs, prostitution, abortions and euthanasia. At the end of the day they believe that humans should be free to make decisions about their own lives without the nanny state interfering. Whilst conservatives don’t believe in the ‘nanny state’ as such these policies are not something conservatives feel strongly about, many conservatives despise prostitution, abortions and euthanasia. As for the organisational structure of the LDP it is not based on personalities unlike Pauline Hanson’s One Nation. All members have a say and this is a potential win for conservatives.

Is there a better way? Finally on top of the Triangle of Hope we see the Australian Conservatives. A newly formed Conservative Party founded by former Liberal Senator Cory Bernardi. The Party believes in advocating for building a sustainable and prosperous economy and maintaining civil society. What does this mean? Well as the Party has just only been founded there are no exact policies on issues however when you go through Hansard and other media outlets and you read up on Senator Cory Bernardi, you will find that he believes in the free market, limited Government, personal responsibility, and a civil society (traditional Judeo-Christian values). The party also believes in democratic processes therefore according to it’s website, all party members will have a say on party matters. According to Paul Murray Live (3/7/2017) the Australian Conservatives in NSW have already reached 4,000 members, this is impressive hence why it is on top of the Triangle of Hope.

Conservatives in Australia have a choice. They could continue to stick with the Liberal Party and be frustrated with being powerless and support leftist policies such as the folly of renewable energy targets, open borders and gay marriage. Alternatively they could consider the Triangle of Hope. Australian Conservatives, Liberal Democrats and Pauline Hanson’s One Nation. These three disciples have potential to shape our nation. There are options and there is a better way.

One thought on “The Three Disciples and the Triangle of Hope”