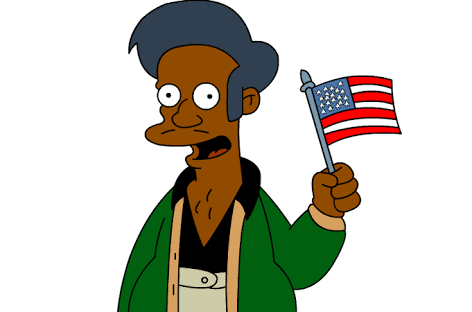 Manjula: Apu, it’s 4 am. You’re late for work.
Apu: Oh. I just had the most beautiful dream where I died.
Manjula: Oh no you don’t! Not til they’re out of college.
Apu: Listen, I’ll die when I want to!

And with a little bit of push by cultral lefties, Apu dies in 2018.

For 29 years from 1989 until 2018, Apu has been on our screens. Actor Hank Azaria has done the voice of Apu from day one. Recently, Hank has come out and states that he will hand over his wobbly head character’s voice to an actual ‘Indian’ stating that he is saddened to hear Indians being bullied because of his Apu voice, he further mentions that he would like to listen to Indian people and to bring in Indian writers into the writers room.  Well where was this opinion 29 years ago? 19 years ago? 9 years ago? or even 2 years ago? This phenomenon is not new, it’s not like Apu is a new character in the Simpsons and is there any anecdotal evidence that racial disharmony is caused by Apu?

Given the rise of the alt-left in America it is no wonder why Hank has had a sudden change around. Their bullying tactics gives anyone the heeby jeebies. I guess for Hank Azaria, he has made his fame and the fact the Simpsons is close to a finale he doesn’t give a shit who does the voice for Apu.

For those who are not snowflakes and are not ‘offended’ by ‘cultural appropriation’ cause lets be honest only pussies are offended by this shit, there is always hope in Seth McFarlane. Family Guy does not hold back on political correctness.