A recent article in the Daily Telegraph “IVF clinics records increase in unattached single women wanting to become mothers” (28/7/19) reports that 8% of IVF recipients are single women. It expresses that there is a growing number of single women who are seeking IVF treatment because they are unable to find the right male to procreate and are willing to raise children on their own.

Raising children when you are in a relationship is no easy feat therefore one cannot ignore the fact that raising a child as a single parent would be even harder. We often hear in the media the struggles of single parenting such as child care costs, healthcare, food, shelter etc all on a single income. Thankfully we have a generous welfare system in Australia which allows people to receive single parent payment from the taxpayers as well as the child care rebate. Company’s also must provide people with maternity leave which allow the parent to be paid whilst looking after their pride and joy.

The issue here though is we often here the plight of single women raising children. Feminazi’s often get on the band wagon and plea that males do not pull their weight when it comes to child support. Women cry foul when Government cuts back on single parenting payments because Governments do not want to increase taxes to pay for the increasing demand of welfare. If we are seeing a rising trend in single women seeking IVF treatment to raise their children on their own, will see see a rise in women claiming the single parent payment from Centrelink? We will see women demand an increase in the single parent payment because these single women will not have a male to pay child support? 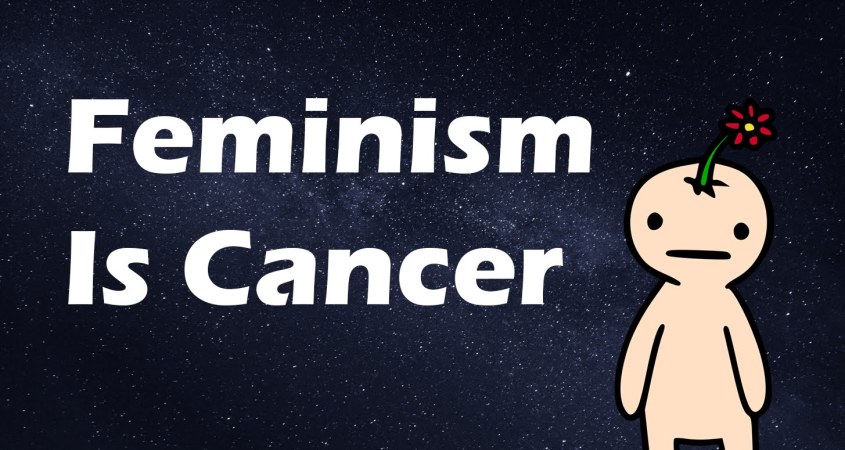 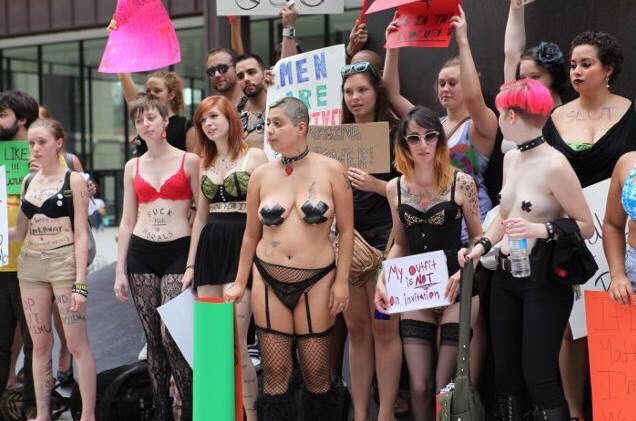 I had a couple of people who were critical of my comments. As a respectful human I will not mention anyones name on here but if you go to my twitter account you’ll see their responses.

I want to clarify my point.

As you see in this photo there are a hand few of women and a couple of probably gender neutral males leeching off them. They are holding up signs saying “My outfit is not an invitation” and some chick has written on her abdomen “Fuck your Morals”. As a conservative male rape is abhorrent and the full force of the law should be thrown at the perpetrator.

Pretend you are a young mother in her 20’s, your husband works full time and you are either at work yourself or you are a stay at home mother. You have no interest in political issues, in fact you are too busy to worry about what is going on in the world because right now your world is you, your husband and your little pride and joy. You decide to take your little pride and joy in their pram for a little stroll down to the park. You get there, you see a lot of comotion, you see police, riot police, police on horses, ambulances on standby and from a distance you see partly naked women, women with breasts out but duct tape covering their nipples and the first sign you see is “Fuck your Morals.” You then hear screeching from these females, your pride and joy gets scared, starts crying and you can’t settle him or her. Instead of a nice day out going for a stroll you then go back home, put on your tv and watch Tucker Carlson. Once you got home you kinda wonder what all the fuss was about but because it ruined your day you don’t care, in fact it infuriated you. Their goal to try and get their message across failed.

My point to this is, and in my Twitter I was directing it to Clementine Ford, are feminists proud of this? If so, then how can they expect to win over the unconvinced. Most people see this type of protest, grotesque and will either turn the tv off or actually, out of spite, go side with the opposing point of view. If feminists want to get their message across stop acting like millennial SJW’s and start being a little more professional.

Christine Milne has resigned from the Leadership of the Australian Greens, and it appears she won’t be standing again for the 2016 Senate Elections. Whilst I’d like to say good riddance, the issue with the Greens go beyond leader’s, as Chris Kenny (http://www.theaustralian.com.au/opinion/columnists/greens-leadership-christine-milne-was-a-snarling-negative-leader/story-fn8qlm5e-1227338470767) pointed out, its their policies and their hypocritical views which are on the nose.

The Greens new leader is Richard Di Natale, a well spoken individual and a GP, his co-deputies are Scott Ludlam (WA Greens Senator) and Larissa Waters (QLD Greens Senator). When you break down this leadership team, 67% are male. Those males are not gay. The only woman is not a lesbian. According to the lefts own admission, one could argue that The Greens are nothing but a sexist, misogynist, homophobic Party.

Where is the diversity in their leadership? The Greens were quick to attack the Liberal Party for lack of diversity – do they work on the premise “do what we say and not what we do?” For a party that champions diversity they aren’t doing too well at the moment.

The Left often argues that they support women’s rights and tend to push the feminist agenda. Segregation of men and women definitely goes against feministic ideals. In the United Kingdom, The UK Labour Party have been found at a Party gathering at a Muslim Community Centre, segregating men and women. Men on one side, women on the other. The question I’d like to know is, why? And where are the feminists??

The UK Labour Party have championed open immigration as part of their platform for winning elections post the Thatcher-era in efforts to keep the Tories out of power. They have admitted that they wanted mass immigration to make UK more multicultural thus in return those from ethnic backgrounds would likely to vote for Labour over the Conservatives.

In Australia for instance, electorates that have high number of immigrants from the Middle East such as Auburn, Bankstown and Lakemba all favour the Labor Party over the conservative Liberal Party.

Ed Milliband, UK Labour Leader has recently declared that if he becomes Prime Minister he will make Islamophobia illegal, despite tough legislation already in place for discrimination.

If the UK Labour Party wins Government on 7th May 2015 and Ed Milliband becomes Prime Minister, what will the UK become? Will segregation be the norm? Will women lose their rights? They aren’t painting a pretty picture.